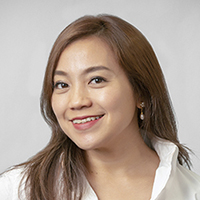 Born and raised in Indonesia, Sayaka embarked on a deeper exploration of her Japanese roots in 2005 when a two-month holiday in Japan developed into a life-changing career switch. Previously an account executive in a multinational advertising agency in her hometown of Jakarta, she seized the opportunity to join Citigroup Japan as a project manager, overseeing four high-level management projects, one of which won her a Quality Excellence Award.

While at Citigroup, Sayaka was one of 16 international delegates representing the corporation to assist then-President Jimmy Carter of the US on a charity mission for Habitat for Humanity, and was also part of a steering group on promoting diversity within Citigroup. After leaving Citigroup in 2008, Sayaka was appointed a board member of the Association of Women in Finance—a group that aims to empower Japanese women in the workforce.

Ever the opportunist, Sayaka moved to Hong Kong in 2010 to join a mergers and acquisitions proprietary intelligence database provider as Regional Sales Manager, during which she took charge of the Japanese and Indonesian markets, serving clients from corporate M&A departments and investment bankers. After the birth of her first child, Sayaka shifted her focus to parenthood and further studies, attaining her Master of Business Administration degree from the Hong Kong University of Science and Technology in 2014.A driven and passionate careerwoman, Sayaka restarted her career as a property consultant at OKAY.com to share with other newcomers her love for Hong Kong and its international environment, open-mindedness and efficiency. Having worked closely with multiple departments at her previous workplaces and international clients, Sayaka is experienced in establishing and maintaining professional relationships, and a people person who will only be satisfied when she sees her clients “click” with their prospective homes.

Outside of work, the energetic mother of two enjoys going to spin class, spending time with family, and travelling.