Introduction To Hong Kong For Newcomers

Newcomers to Hong Kong will find it to be an international city with abundant daily resources and locals well-versed in English that help facilitate one’s ability to get around. Underlying this is a society immersed in Chinese tradition that is just waiting to be discovered.

Your first impression of Hong Kong will most likely come from sensory overload - bus engines roaring, large screen televisions, diverse crowds of people, mobile phones ringing and people speaking above it all in different languages. These are all reflections of what is essentially a multi-faceted cosmopolitan city with a broad Chinese core.

This article aims to provide you with a general introduction of Hong Kong, including history, geography, weather, entertainment, language and dining. The unique blending of Eastern and Western culture in Hong Kong will offer you a kaleidoscope of encounters and a wealth of memorable experiences.

Hong Kong’s history started from an isolated fishing village and it became a key trading entrepôt by the late Century. The 20th Century was a time of extremes - fluctuating population growth and retrenchment, economic booms and busts.

The new Chinese Republic in the 1920s brought a flood of refugees as well as political instability that eventually led to economic decline and instability. Stability returned in the 1930s just before the Japanese occupation of China brought a new wave of refugees. Japan’s subsequent takeover of Hong Kong effectively halved the population when many returned to China and those who remained suffered from the inevitable. It also saw the complete destruction of the environment as the Japanese used the native trees for firewood as there was little else to use as fuel. Reclaimed by the British at the end of the war, Hong Kong started to rebuild its economy and plant new trees. A new wave of one million Chinese refugees then followed the transition of government in China in 1949. Soon afterwards, Hong Kong established itself as a manufacturing base when forced to find new sources of revenue as a result of the U.N. trade embargo on China during the Korean Conflict. The 1960s Cultural Revolution brought tension but also unity as, for the first time, the Hong Kong people began to feel a sense of “national” identity. Political stability throughout the 1970s and 1980s – the issues of 1997 and its ensuing turmoil notwithstanding – was an extended period of soaring wealth. Since the end of British colonial rule in 1997, Hong Kong continues redefine itself as a SAR (Special Administrative Region) of China. 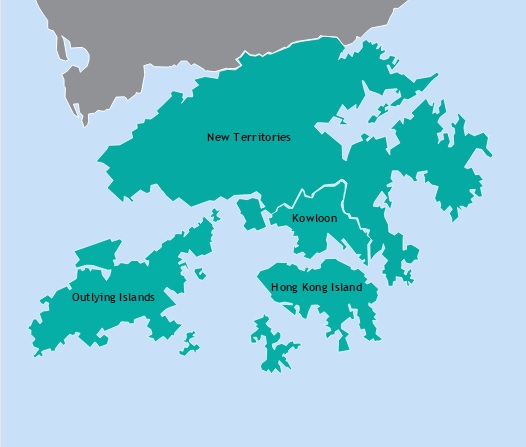 Located on China’s south coast, the SAR consists of Hong Kong Island, the Kowloon Peninsula, the New Territories and 200 offshore islands – of which Lantau Island is the largest. These are all well connected to each other through a system of roads, bridges, tunnels and ferry routes. Known for its intensely urban vertical living, only 25% of the territory’s 1,104.38 square kilometers is developed. 40% has been designated as a country park or nature reserve and the remainder is currently not developable as much of Hong Kong Island is too steep to build upon, ensuring a green view for most who look onto a hillside.

Hong Kong’s climate is almost subtropical and has long humid summers and cool temperate winters. The summer months in Hong Kong generally range between 25°-35°C / 77°-95°F with relative humidity hovering around 90%. The effect is much like being in a steam room so advocates of hot yoga will feel rather at home! Accompanying summer is the typhoon season that runs roughly from July to September - although it is not unusual to experience gale force winds as early as May or as late as November.  January and February temperatures are 10° to 20°C/50° to 66°F and the relative humidity drops below 70%. Nevertheless one will need warm indoor clothing as the winds blow from the north (originating from the Siberian Plain) and homes are un-insulated concrete with no central heating. 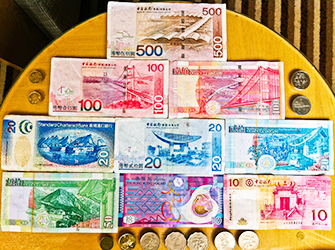 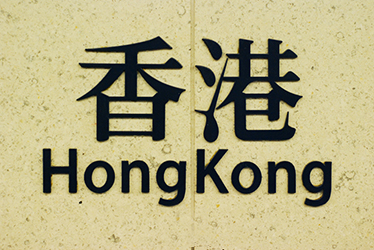 The official languages of Hong Kong are English and Cantonese (the native Chinese dialect) with Mandarin a de-facto third.  It has also become a required language for the majority of jobs in Hong Kong and as a result, Hong Kong people are encouraged to be tri-lingual and bi-literate. The standard of English has always been quite high although the focus on English in schools and society has arguably shifted slightly in favor of Mandarin. It is still possible to get about in English but we encourage you to seize the opportunity to learn some Chinese!

With the many choices of long-distance telecom providers in Hong Kong, making an international call is easy. Callers from overseas need to use Hong Kong’s country code +852. 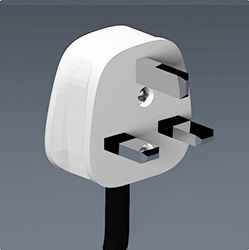 The electrical voltage in Hong Kong is 220 Volts AC, 50 Hz. Most appliances now use a 3 square pin plug (at one point, because everything is imported to Hong Kong, there was no standard pin and a collection of adaptors was a must). Adaptors for appliances geared to 100V are easily found and very reasonably priced.

According to the Water Supplies Department of Hong Kong, the quality of water treated in the WSD treatment works is potable. However, the type of water pipes used in buildings and residences can have a significant effect on the quality of water after it leaves the treatment plant. Nevertheless, WSD does not recommend the installation of any domestic water filters because they are ideal breeding grounds for bacteria if they are not maintained properly. By practice, many boil their water before consumption or drink it from a bottle.

Hong Kong’s being such a cosmopolitan city is reflected in its diverse fashion scene. Heavily influenced by Tokyo trends, it resembles the eclecticism of the Harajuku District where ‘anything goes’. One will see the latest styles as well as impeccably attired classical looks. Cultural attire is also readily acceptable in Hong Kong. Given the diverse scope of nationalities represented here, it is not unusual to see Nigerians in their brightly colored attire or Indian women in their elaborate saris.

Business attire in Hong Kong remains largely western and suits are the norm (or shirt and tie in hotter weather). In recent years there has been a trend towards a less formal style and some companies have “casual Friday” policies.

If you are out on the town you can expect to see people dressed in varying degrees of formality. However, whilst it is acceptable to have a few Friday night drinks in your work suit or to paint the town red in your favorite pair of worn jeans, note that there are still some establishments requiring a coat and tie for gentlemen, and jeans, sneakers or flip flops may deny you entrance to some hotels, restaurants and clubs. During the summer months, light cotton clothing is preferable as they ‘breathe’, but an extra layer may be warranted in the air conditioning. Winter, although mild in temperature, requires an additional layer or two as buildings are neither insulated nor heated. It is not unusual to see people wearing their coats and scarves inside! 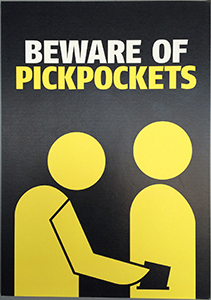 Hong Kong is one of the safest cities in the world at any time of day or night, in part thanks to our well-trained Police Force. Nevertheless, exercise common sense when out-and-about and watch over your possessions and be aware of your surroundings when in unfamiliar territory. As in any major city, there are nimble-minded pickpockets looking to help themselves if given the opportunity. At home, keep doors locked and windows closed if leaving the property empty. We would also advocate driving with the doors locked or do not leave your handbag/briefcase unprotected on the back seat.

Hong Kong provides a wide range of entertainment, either private or public. Public broadcaster RTHK (Radio Television Hong Kong) is funded by the Government but operates as an independent body, and is tasked with providing English and Chinese programming. The English radio and television channels also air programs in other languages, i.e. Korean, Japanese and Tagalog. Otherwise, there is a plethora of English-speaking television shows, many through subscription to cable or broadband TV. 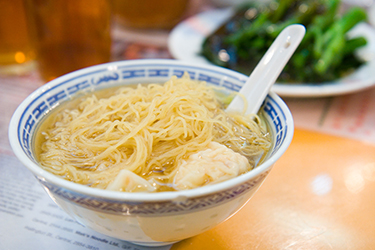 Nearly every culinary style, Chinese or Western, can be enjoyed in Hong Kong – the world-known food paradise. A particular favorite amongst all Chinese is the bowl of congee, a type of porridge made from rice and water into which various meats and/or seafood is added – the Cantonese version is considered by many to be the finest. Another notable Hong Kong cuisine is a bowl of wontons, which in Hong Kong are stuffed with fresh shrimp. They can be consumed in soup alone or with noodles or sometimes deep fried. A splash of red vinegar enhances the flavor to perfection. Practically every major cuisine is available in some form here, from the reasonably priced to the eyebrow-raising extravagant. Apartments in Hong Kong are small and people work long hours so dining out is considered as more of a necessary daily luxury rather than only saved for special occasions.

Don’t see something that you think would help others? We always welcome and appreciate your input – please contact us if you have a comment, notice an error, or if you have resource, website or other topic that you feel would be helpful. Thank you!

Disclaimer:  The above commentary is for reference only.  Any facts should be verified by independent sources and no warranty is made as to their accuracy and they may have changed since the posting of this article.  This article and any references to third parties or other websites is not intended to endorse any business, individual or organization.
Tags: moving to hong kong, information and resources
Share:

11 December 2014 - According to estimates of the Consulate General of France in Hong Kong, there are now 17,000 French residing in the city. A 50% plus increase of French arrivals within the last 5 years was recorded by the Immigration Department, g

Living in Hong Kong: A Year in Discovery Bay

22 April 2016 - I grew up living in Hong Kong as an expat and am now a Discovery Bay resident, having relocated back to the city last year with my family. Upon searching for a home, I was admittedly hesitant about the suggestion to look at Discovery